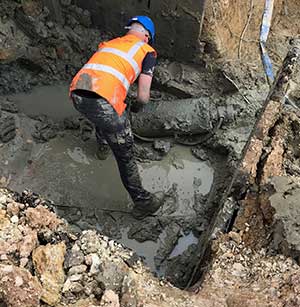 During the ongoing construction project at Broadbridge Heath in W Sussex, Fellows have continued to provide UXO risk mitigation services and have, over the last 2 days recovered 14 large WW2 era bombs from the site.

Prior to these recent discoveries, excavation works at the site of the former military bomb disposal school have unearthed 2 previous finds, a German SD500 (1000lb) bomb and a British 15-inch howitzer shell. Due to the swift and positive actions of the on-site Fellows UXO Engineer, both of these items were quickly identified as safe and that they had previously been used for training of military personnel in bomb disposal procedures.

On inspection, the on-site Fellows UXO Engineer and Fellows Operations Manager, Jason Webb were able to confirm the bombs were all safe and Free From Explosives and had probably been dumped and covered when the site was handed over to the local council as military use of the site ended. 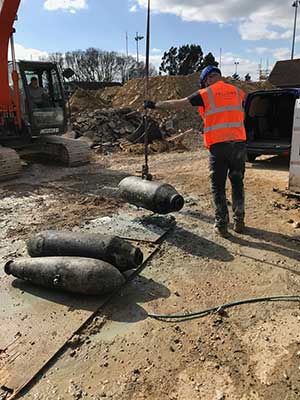 This level of knowledge proved pivotal in the rapid and correct identification of all of these items of UXO thereby minimising down time at the site and saving the client time and money.

Although most of the items recovered were safe and free from explosive, Fellows previously recovered and disposed of a live WW2 20lb Fragmentation bomb at this site. This proves that even though the site history tells us that the presence of live items is unlikely, every precaution must be taken to correctly identify and assess the risk posed by each individual weapon by a suitably qualified and experienced UXO professional.

Fellows General Manager, Andrew Ward said ‘I’m extremely pleased at the way we were able to assist both the developer and the local council at this site. The presence of a Fellows UXO Engineer on-site allowed the items to be identified, confirmed as safe and removed from site thereby avoiding costly delays to the client’s programme of works. More importantly it ensured that the general public were never at risk and the local community not inconvenienced. However, this is not an isolated issue and sites all over the country are uncovering WW2 weapons with potentially deadly consequences if not handled correctly.’

The inert items have now all been removed from the site and will be donated to local museums.