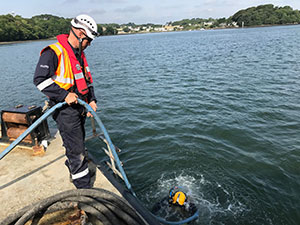 As part of the rebuild of a fuel jetty within the confines of Devonport Naval Base, Fellows supplied UXO consultancy and Target Investigation support to the main contractor engaged in the modernisation of this vital part of the UK’s military infrastructure.

The jetty forms part of a fuelling complex from where the Royal Navy and other NATO warships are fuelled and from where British and NATO tankers receive their fuel supplies before replenishing warships at sea.

An initial marine survey was conducted which resulted in 25 buried anomalies being classified as potential UXO. As part of the initial survey and risk assessment work, Fellows produced a Threat Assessment document detailing the most likely types of munitions to be found in the area ranging from German WW2 aerial bombs to British torpedoes and depth charges.

Following completion of the survey analysis and production of the Master Target List (MTL), Fellows supplied an EOD Supervisor and an EOD Diver to augment the client supplied diving barge and spread.

The EOD Supervisor carried out full threat briefings to all personnel engaged in the task prior to any seabed operations and the use of an excavator with a precise 3d GPS system allowed the EOD Supervisor to excavate the buried items before a diver carried out the final uncovering and identification. All targets were successfully identified as non-hazardous metallic scrap and these were removed to allow the redevelopment work to continue.