A contactor was carrying out the final stages of ground preparation at a future residential site in Trowbridge, Wiltshire.  During the course of some shallow intrusive works for building foundations, an excavator unearthed and ignited several old No.76 (Phosphorus) Grenades. 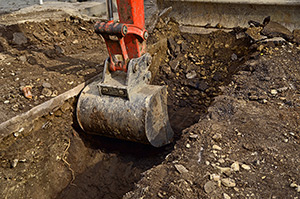 Fellows were asked by the ground consultant to supply further UXO Risk Management services at the site to allow the development phase to be completed and the site to be handed over. Fellows conducted a review of the risk assessment documentation and were able to advise on further safety measures to provide contractor safety. Fellows also provided a UXO Engineer, experienced in dealing with these items, to the site for a three day period to offer oversight of the final intrusive works and responsive measures in the event that any further Self Igniting Phosphorus (SIP) grenades were unearthed.

On arrival, the UXO Banksman was able to deliver a comprehensive briefing to all site personnel to make them aware of the hazards posed by the items. The Fellows UXO Engineer was able to advise on suitable PPE and checked the emergency response plan for the site in case further grenades were found and initiated.

Some hours later a small excavator was working in proximity to the site boundary when two further bottles were disturbed by the excavator bucket and broke; igniting immediately.

Due to previous briefings and quick reactions from the Fellows UXO Engineer, the issue was contained, the site workforce evacuated and the general public was made safe by immediate footpath and road diversions. The emergency services were summoned but by the time they arrived the UXO Engineer had dealt with the ignited grenades and had confirmed the immediate are safe. This allowed a rapid return to normality for the site and minimal disruption to the work schedule.

The site photo shows the area where the grenades were found. The position was immediately adjacent to the public footpath and over the road from a primary school.

Risk Management recommendations from Fellows included only digging the suspect area during quiet times and closing the adjacent footpath.