Following the large scale redevelopment work in Her Majesty’s Naval Base Portsmouth to accommodate two new QE class aircraft carriers, Fellows were required to provide a Marine UXO survey to determine the presence, or otherwise of Unexploded Ordnance (UXO) in an area earmarked for a new mooring dolphin. 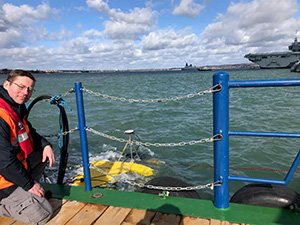 Due to the intended emplacement of marine piles to support the mooring dolphin, the client needed to confirm that it was safe to carry out the intrusive seabed work in an area not previously covered by marine survey.

Fellows contracted SAND Geophysics Ltd from Southampton to carry out the survey using both traditional Side Ccan Sonar (SSS) and the newer technology of 3dChirp. The combination these processes ensured that the survey detectect items proud of the seabed and buried items. The detection of buried items is essential to ensure that items of historic ordnance such as German aerial bombs, sea mines and artillery or Naval shells wouldn’t compromise the safety of the intrusive works.

Precise positioning is essential for any marine survey and the modern equipment supplied by SAND allowed for the production of a detailed survey report for the client giving accurate, centimetric contact recording and the compilation of a Master Target List detailing the position and size of potential UXO (pUXO) contacts for future investigation.

All of Fellow’s marine work is carried out in accordance with CIRIA report C754 (UXO risk in the marine environment) and is planned, managed and overseen by experienced marine UXO professionals.