Thurleigh Airfield is a former RAF air station, located 5 miles north of Bedford. As with many other ex-military sites it is being developed for use as a business park. As an ex-military airfield, the preliminary risk assessment identified that UXO may be encountered on the site and also highlighted the potential for a radiation hazard to be present in the form of Radium, which was commonly used as luminous paint on aircraft dials in the first half of the twentieth century. Fellows were commissioned to provide ground investigation support and provide assurance that both the UXO and radiation risk were as low as reasonably practicable. 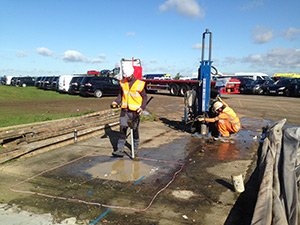 Fellows recommended and were subsequently contracted to carry out a non-intrusive magnetometer survey to identify any UXO that may be present close to the surface and could pose a risk to the GI operations. As with most ex-military airfields, there was also a risk of Gamma radiation from the Radium paint so an  energy-compensated Geiger Mueller detector was used to monitor the radiation dose rate in the vicinity of the working area.
As no metallic contacts of note were identified at the surface and the recorded dose rate was commensurate with background, the Fellows UXO Engineer was able to assure the Ground Investigation contractor that it was safe to proceed with the Ground Investigation.

Prior to GI works below 2 metres, the Fellows UXO Engineer provided down-hole magnetometer surveyto ensure that the ground being investigated was free of metallic objects. The background radiation levels were also continuously monitored at each location to ensure no radioactive material had been uncovered.

In total, five locations were investigated and cleared for UXO risk to a depth of 4 metres. No metallic anomalies were identified and radiation levels were consistent with background levels, indicating that no UXO or radioactive contamination were present. A report was compiled for the client who was able to proceed with the development, confident that both the UXO and radiation risk in this area had been reduced to ALARP and confident in the knowledge that they have complied with the assessment of risk required under CDM 2015.