Following contract award, Fellows were tasked to survey an area of 110 hectares over the rough terrain of Dartmoor, some of this verging into the current Okehampton military firing areas. Dartmoor has a long history of military training and the UXO threat ranges from hand and rifle grenades to artillery projectiles and mortar bombs.

The aim of the survey was to identify potential UXO (pUXO) contamination within the surveyed area in order to allow the client to carry out essential maintenance works involving upkeep of the fragile eco-systems of the moors which provide the fresh water to the majority of the towns and cities of SW England. 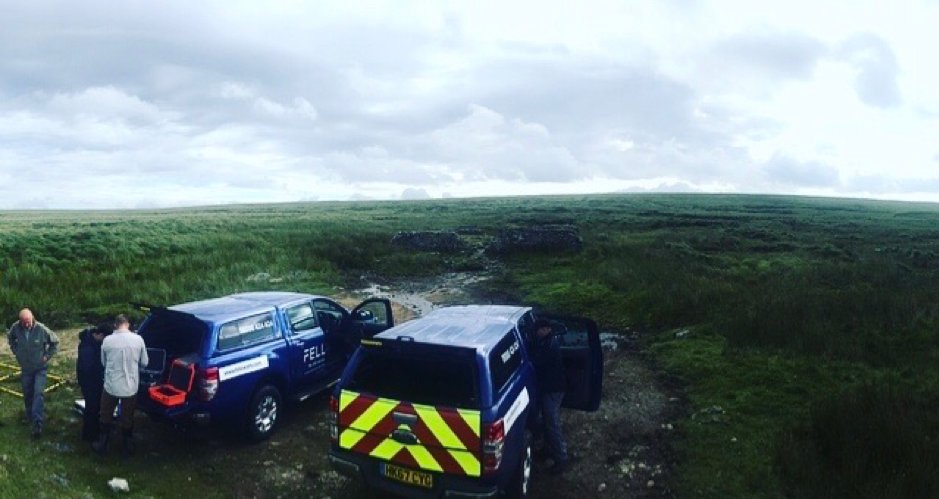 Having conducted a site visit and studied the local environment, Fellows recommended a pedestrian UXO survey. Although other options including the use of Aerial Unmanned Vehicles (AUVs or ‘drones’) and vehicle systems were considered

Fellows’ Data Analyst plotted the areas to be surveyed using a GIS platform and divided the area into 50m x 50m boxes, resulting in approximately 465 grid boxes to cover.

Coordinates were taken from the GIS system and were downloaded into the handheld GPS units carried by the survey teams.

The boxes could then be physically marked out by the survey team leader using marker poles and lines to ensure that even in the typically poor weather of the upper moors, the team were able to safely and accurately cover the survey areas.

Data was recorded in real time and uploaded daily to the Fellows data analyst who was able to remotely review the data and advise the team of any omissions or repetition required.

Fellows team of ex-military EOD and survey specialists completed the survey on time and to budget. Exceptional support and assistance from the Fellows Data and GIS team meant that the survey planning, which was pivotal to success, was carried out in good time and all detail passed to the team on the ground.

Despite the 2 month delay in proceedings caused by bird nesting season the survey was completed as planned and over 548 potential UXO targets were plotted. This allowed the client to conduct the follow on work of maintaining the free-flowing water supply to Exeter and Plymouth with minimal impact to the unique environment of Dartmoor.