Recognising the opportunity for Allied landings at the islands in WWII, the occupying German forces fortified the coastlines of Jersey and Guernsey. This, coupled with a history of mining and aerial attack presented a risk of UXO encounter during future development works in the islands.

Before a cable installation project running between the two islands could commence safely these past areas of conflict needed to be investigated.

Both coastal sites were identified by Fellows UXO Research Department as known areas of military conflict, occupied and fortified by the Axis powers during World War II.

Fellows recommended a non-intrusive survey which would locate any potential unexploded ordnance (pUXO) anomalies that might be shallow-buried along the landfall cable route.

Following setting out and calibration of locator and precise positioning equipment the area was then surveyed, with all data logged and recorded. This data, coupled with DGPS input, allows the area to be surveyed and plotted to within one metre accuracy and allows the re-acquisition of detected anomalies in preparation for them to be excavated and identified.

Despite an incredibly narrow tidal window at both sites (only two hours of survey across the entire area at both sites) the Fellows three-man UXO Survey team successfully delivered a non-intrusive UXO survey on time and as planned.

This survey highlighted geological and metallic anomalies including historic cable positions all of which were recorded for later pinpointing and future intrusive investigation.

As marine UXO risk mitigation specialists, Fellows were also able to recommend the right equipment and procedures to give the client a rapid and effective survey of the areas in question. This allowed the UXO risk to be reduced to ‘As Low As Reasonably Practicable’ and more importantly provides the client with peace of mind to continue with their planned works. 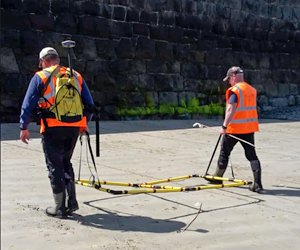